After Melissa and Josh were married, they decided to leave the comforts of home for the unfamiliar. In their case, the unfamiliar was the Pacific Northwest. Both Melissa and Josh had called Oklahoma City home for years and felt it was time to take on the challenge of building anew, together. “We got married last April and we knew we wanted to move somewhere within the first year of our marriage and stay for about a year,” Melissa says, “To have that adventure together, experiencing new things together, forming new friendships and relying on each other instead of the comforts of home. It’s been such a fun experience so far!” Both Melissa and Josh run their own creative businesses— Melissa a photographer and Josh a woodworker — thus, their home doubles as their workspace. “We both work from home, so having a space that’s easy to keep clean and organized was important, as well a space that’s inspiring to work in” Melissa says. They’ve combined store-bought pieces, (Hello, Peggy Sofa!) with furniture Josh has created. “With Josh being a woodworker, our home is starting to overflow with his furniture pieces. The coffee table, side table, and adjustable shelf peg wall were all made by him over the past year!” Melissa says of the pieces. The large windows allow for plenty of natural light and reminders of home are sprinkled throughout, “It was important to us to fill the space with things that helped us feel at home in a new city, items that bring us joy when we look at them” Melissa notes. Tour their home below: 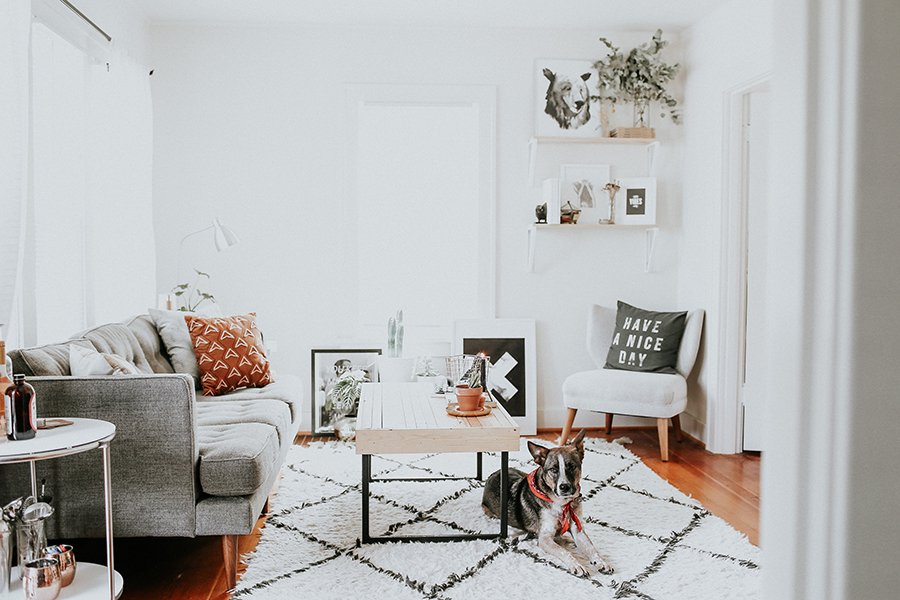 California native turned Brooklynite (by way of Colorado). Lover of dogs, coffee and sweater weather. Known to enjoy a cocktail or three. Molly On The Range Release Event at West Elm DUMBO